One of the most significant business challenges faced by mining companies today is connectivity.

Explains David: “We work in the remotest corners of the globe, like 3,500 metres up in the Chilean Andes or hard to reach parts of Africa. It means we face connectivity challenges seldom found in other industries.”

A few years ago, as part of its worldwide IT strategy, Anglo American struck a global managed services deal with BT. At the heart of the contract was the creation of a single BT IP Connect global infrastructure.

This global wide area network delivers a much faster speeds than anything previously experienced by Anglo American - at much less cost too. The network connects 69,000 people across Australia, Sub Saharan Africa, Canada and Latin America.

“IP Connect assures us of a fast and resilient network anywhere to increase asset automation, improve productivity and drive collaboration across and between our businesses,” says David.

At first the primary goal for Anglo American was a joined-up business, but the firm has since added voice, video and other collaborative apps. The six classes of service (CoS) inherent in BT IP Connect global allow prioritisation of those different types of traffic. 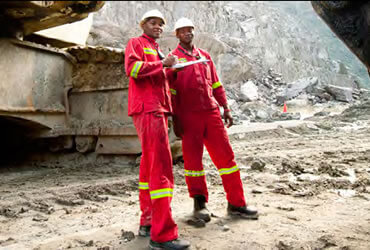 In recent times the demands on the network have changed – and of course, they continue to evolve. But innovative technologies and solutions from BT have allowed Anglo American to extract optimum value from its investment.

And it does so in two ways: first by using advanced data compression techniques to make better use of bandwidth; and second by locally-caching large files to prevent their repeated transmission across the wide area.

Anglo American estimates that, thanks to the bandwidth and network efficiency it delivers, BT Connect Optimisation, will save the firm tens of millions of pounds over the lifetime of the contract.

An end-to-end BT IP Connect global infrastructure comes with another major plus: the ease of introducing collaborative tools.

As a result, BT has replaced of hundreds of legacy PBXs with BT One Enterprise, a solution based on Cisco Unified Communications Manager (UCM) technology.

Some 20,000 Anglo American users are served by four UCM hubs located in each of the company’s four global regions, with full eight-digit desk-to-desk dialling throughout the world.

Meanwhile, BT One Voice makes sure that (where regulations permit) international fixed and mobile calls are carried over the BT network and incur only local call charges. Taken together with BT One Enterprise, the company is seeing a significant reduction in its annual call charges.

“As well as the cost savings, we’re now able to operate as a truly global community,” says David Heppenstall. “Connecting with colleagues anywhere in the world can be as simple as picking up the phone and hitting a few keys. That means we share ideas and knowledge much more readily.”

The majority of Anglo American operations are in the southern hemisphere, however, apps like Microsoft Office 365, Box and Jive are hosted in the northern hemisphere. This means latency is a potential showstopper.

To overcome the issue, BT designed and deployed a secure internet gateway in its Croydon data centre and negotiated peering arrangements with Microsoft, Amazon and the many others.

When it arrives at Croydon, it’s a short hop to the app provider through a lightning-fast BT Internet Connect service. Problem solved.

Round the world video

Says David Heppenstall: “A major aim is to help find and share best practice across our businesses wherever it occurs in the world. For example, if someone in Chile has found a way of better utilising our large fleet of haul trucks we need to be able to share that learning across the globe as quickly and efficiently as possible."

Six fully-immersive Cisco TelePresence suites (two in London, two in Johannesburg and one each in Rio de Janeiro and Santiago) are achieving 100 per cent utilisation and 99 per cent customer satisfaction.