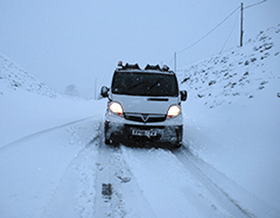 2015 began with some severe storms, with phone and broadband services to thousands of homes and businesses disrupted, as well as power supplies, amid prolonged freezing temperatures, lightning strikes and high winds gusting up to 113mph across Scotland.

Although the Scottish Highlands and islands bore the brunt of the damage, very few parts of Scotland were unscathed after the series of storms – described by one of BT’s long-serving engineers as the worst he has seen in nearly 50 years with the company. 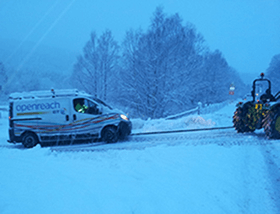 Two hundred and forty engineers from England and Wales were drafted into support Scotland's resident two and a half thousand engineers. It was a very challenging time as engineers had to work in sub-zero temperatures which fell as low as minus 12 overnight in some parts. The high winds caused snow drifts and felled trees and in some locations engineers left their vans and walked more than a mile to repair faults.

Two engineers got a memorable trip when they were airlifted by helicopter to the remote radio station at Carbreck in the North West of Scotland to carry out refuelling at the facility. 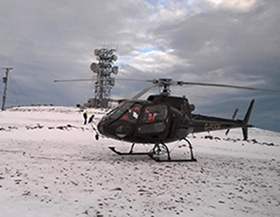 Scotland’s Deputy First Minister expressed particular gratitude to the men and women on the front line. In his letter, he said: “They’ve been exposed to extreme and widely varied weather conditions, yet have battled through to ensure the public continues to receive the essential services BT provides.”

We can respond to any incident as a first on scene responder to feedback an initial situation report, providing pictures and video as required to the MIM. We can also act as liaison for the emergency services.