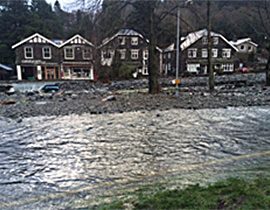 BT launched a pan-BT operation to help the community and restore services in Cumbria after storm Desmond delivered a record-breaking 341mm of rainfall in just twenty four hours. The storm delivered a devastating blow to Cumbria over-running flood defences to inundate thousands of homes and businesses while washing away bridges and causing roads to subside.

Our major incident management (MIM) team dealt with an increasing number of exchanges at risk of losing service. The Emergency Response Team (ERT), was deployed to assist our engineers in the Cumbria area. They took flood defence kits and communication response units to help across the exchanges at risk.

BT Facilities Services tackled extensive flooding in both Carlisle and at the Telephone Exchange in Kendal. 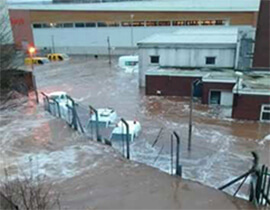 The main bridge into Glenridding was washed away which took our fibre cables with it depriving the village of landline and broadband services. BT’s Emergency Response Team (ERT) set up a vehicle near the local bus shelter to provide an emergency satellite phone for the village, restoring 999 capability and providing police communications. Openreach engineers showing great ingenuity and with the use of a fishing rod, managed to get a line across the river which they used to get a temporary cable across the flooded river, attached to trees on either side.

The rapid response team had its work cut out and had a lot of faults to fix in the ensuing days.

Prince Charles praised BT’s efforts when he visited Cumbria in the aftermath of Storm Desmond, and the Governments flood minister Rory Stewart who accompanied him had glowing praise about Openreach and BT’s performance.

The Christmas and New Year proved to be a very busy time for BT teams when Storms Eva and Frank struck the UK, and this had major impact on the BT network. Flooding to York and Newtown Stewart Exchanges resulted in a loss of Telephone and Broadband services to many customers. The Tadcaster Bridge partially collapsed and Elland Bridge was under threat of collapse and both of these bridges carry BT services. Engineers worked around the clock in extremely difficult conditions to restore services and reroute cables. 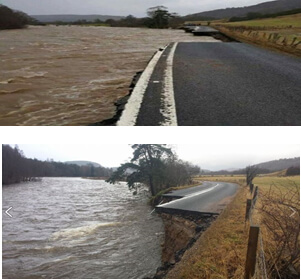 On New Year’s Day the River Dee washed away a 500 metre section of the A93 west of Ballater causing damage to multiple fibre and copper cables, resulting in the loss of Telephone and Broadband services to BT Exchanges in Braemar and Crathie.

The Emergency Response Team were dispatched to Braemar to provide communications support and the Red Cross Satellite Comms vehicle provided support at Crathie. Openreach Engineers worked tirelessly over the weekend installing temporary cabling and service to both Braemar and Crathie was fully restored as quickly as possible given the extensive work required.

We can respond to any incident as a first on scene responder to feedback an initial situation report, providing pictures and video as required to the MIM. We can also act as liaison for the emergency services.