In July 2016 The National Archives announced that BT Archives had been awarded accredited status by the UK Archive Service Accreditation Committee. Only around 50 archives services from a total of almost 3,500 across all sectors in the UK have attained Accreditation.

We’ve been recognised by Arts Council England's Designation Scheme in February 2012 for the outstanding importance of our collections as part of the country’s national heritage. There are only a few corporate archives that have received this accolade.

The scheme identifies and celebrates collections of national and international importance held by non-national institutions. These world-class collections are chosen for their quality and significance, and are a vital part of our national cultural and artistic heritage, and a lasting source of inspiration and enjoyment.

UK Memory of the World Register

In May 2011, BT’s collection of records from 1879-1995 was selected by the United Nations Educational, Scientific and Cultural Organization (UNESCO) to represent the outstanding heritage of the United Kingdom. The records document over a century of British telecommunications achievements.

UNESCO UK created the Memory of the World Register to promote the UK’s documentary heritage and raise awareness of its archives.

We also partnered with the British Film Institute and the British Postal Museum and Archive to successfully nominate the work of the GPO Film Unit from 1933-1940.

The pioneering Film Unit produced one of the finest British collections of documentaries, public information, animation and industrial film to come from a single source. Its iconic films, many of which introduced new communications technologies to an astonished public, have an appeal that hasn't dwindled in more than 75 years. 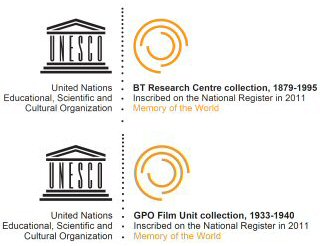